Discover the charms of Seville in this central, modern and fully renovated hotel. Enjoy an unforgettable stay, book with us! 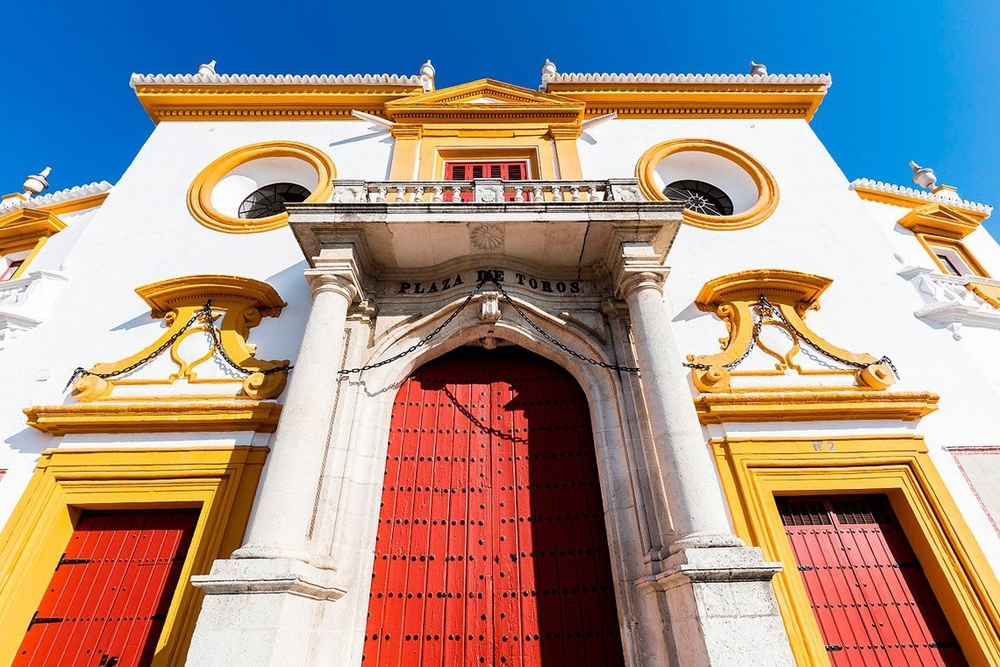 Built between 1761 and 1880, it was designed by the architect Vicente San Martín in 1758. The bullfighting museum is housed inside.

The bullring is almost circular in plan, covering the high seats with a roof that rests on semicircular arches on marble columns.

There are fourteen access doors and among the rooms there are a chapel, three stables, two corrals, twenty-one pens, an infirmary and a slaughterhouse. 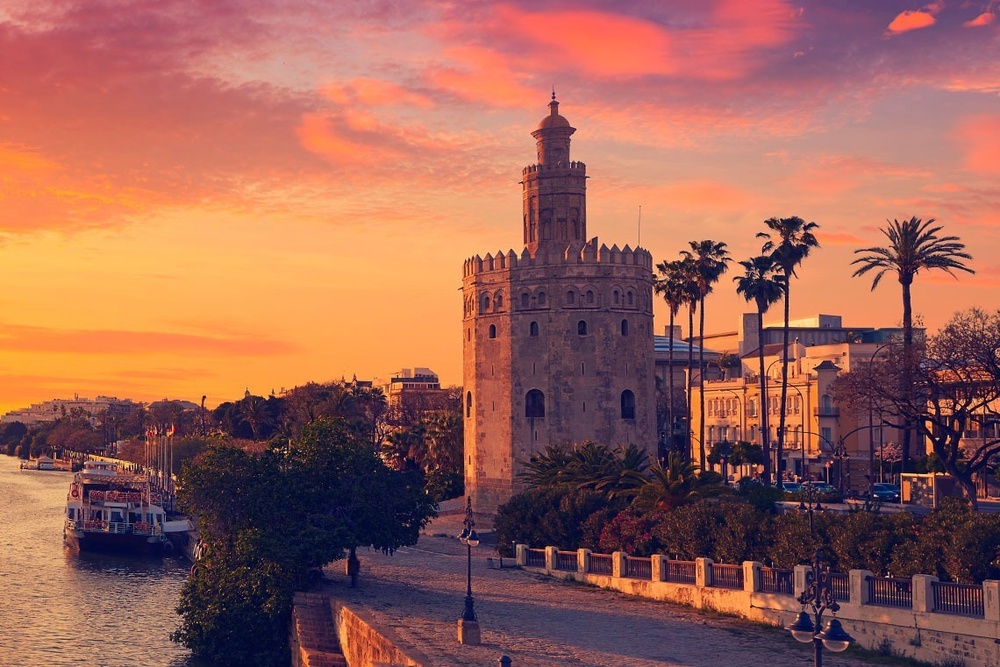 It was built in 1221 by the last Almohad governor Abu-l-Ula. It had defensive character because from its foot and until the other bank of the river a chain that closed the entrance of the port was arranged.

It presents three bodies, of dodecagonal plant the inferior one, hexagonal the intermediate one and circular the superior one that was added by Sebastián Vander Borcht in 1760. In its entrance portal two bronze cannons.

Its name is due to the external coating of golden tiles that it had or to the storage of riches that were kept in its interior coming from the ships that returned from America.

In the sixteenth century due to its poor condition it was remodeled and in the seventeenth century was affected by the Lisbon earthquake of 1755 and the damage caused was repaired in 1760, when the upper body was added.

At present it is converted into a Naval Museum and its interior houses models, engravings, navigational instruments, sea charts and historical curiosities. 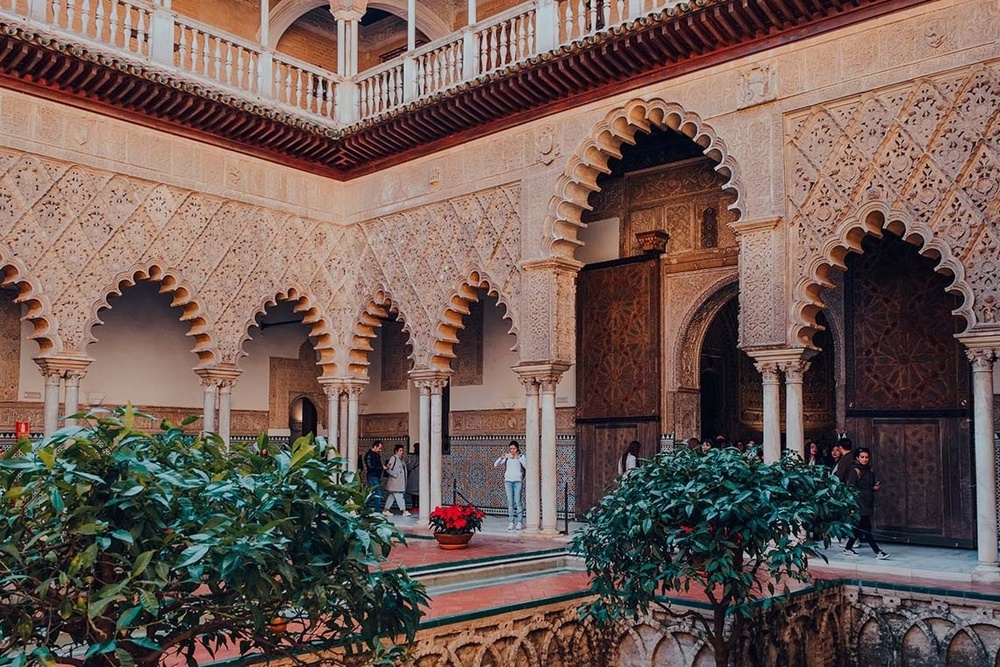 Abd al Rahman III begins the construction of the Alcazar, enclosure of quadrangular form, of stony walls and located in an end of the city.

In the 16th century, on the occasion of the wedding of Carlos V with Isabel of Portugal, a series of reforms took place, including the replacement of the pillars supporting the lobed arches of the Patio de las Doncellas with pairs of marble columns, the introduction of Renaissance decorative elements, the reconstruction of the upper part, the design of a new ceiling in the "Salón de Carlos V", the remodeling of the Gothic palace of Alfonso X and works in the Gardens.

To the Patio de las Doncellas open the three main rooms: the halls of Ambassadors, of Charles V and Bedrooms of the Moorish Kings. 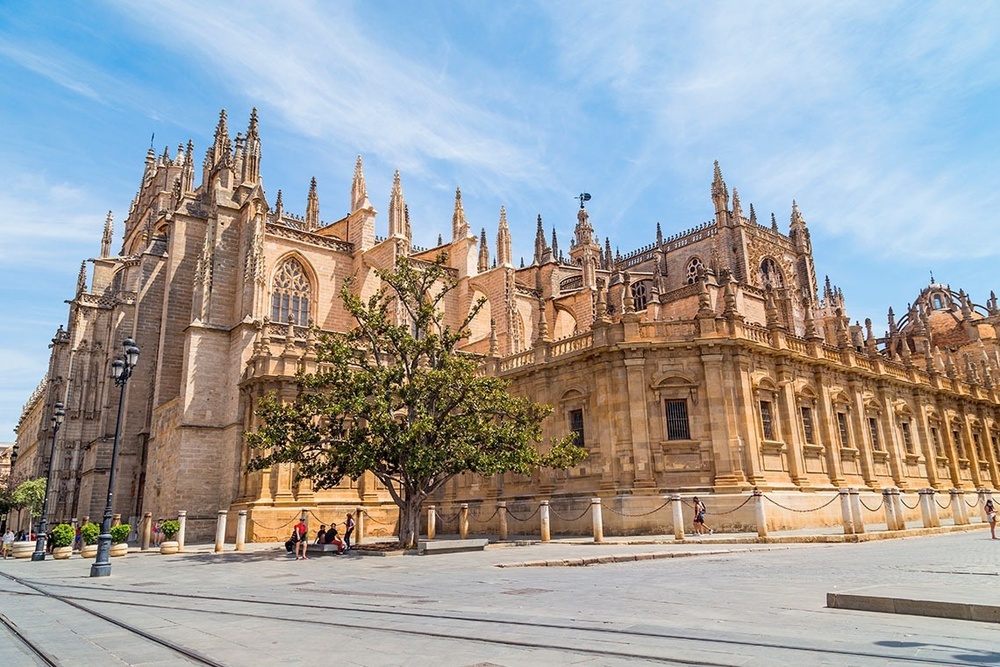 Of Gothic style, its construction began in 1433 by the architects Ysambret and Carlín on the old Almohad mosque, its construction lasted 65 years being finished in 1507. It was financed by private donations from canons, prelates and some laymen, also establishing a tax on the meat trade, the amount of which was destined to the aforementioned work.

The cathedral has a hall plan with five naves and chapels between the buttresses. It is 116 meters long by 76 meters wide and has 93 stained glass windows.

In 1660 the first Sevillian Academy of Fine Arts was founded in the building.

To the Cloister of the Cathedral, known as Patio de los Naranjos, the access to Puerta del Perdón is made through the so-called Puerta del Perdón, formed by a pointed horseshoe arch and decorated with plasterwork made in 1522 by Bartolomé López, sculptural group on the sides, formed by "San Pedro and San Pablo", and on these, "la Virgen y el Arcángel San Gabriel" and relief of the "Expulsion of the Merchants" located on the arch of the door. The works of this courtyard began in 1172 C. and were concluded in 1196 C. It has been later reformed although it has kept part of its original structure. 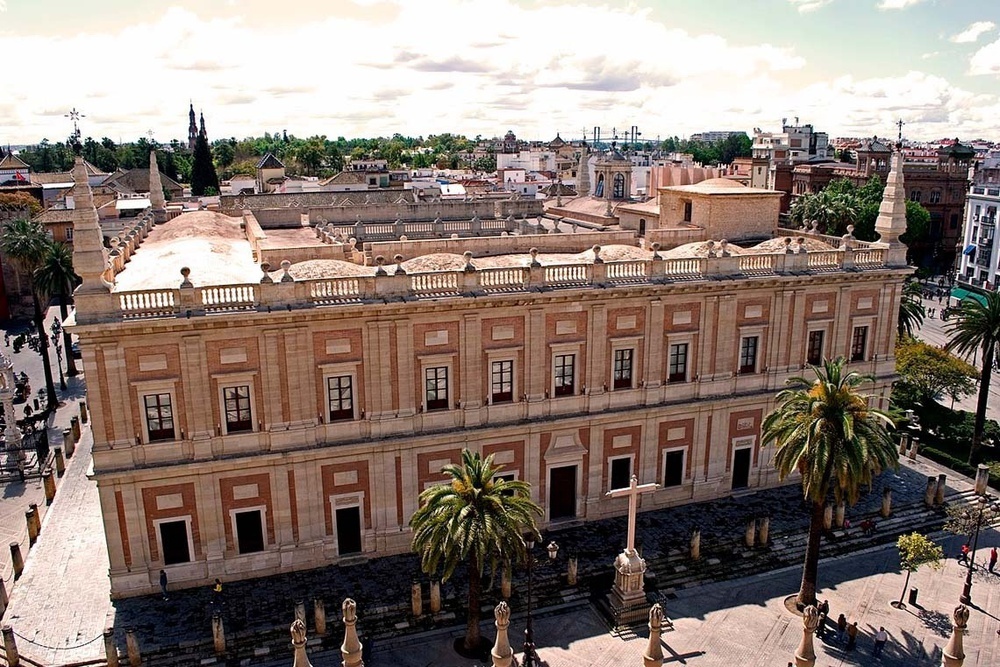 Archive of the Indies
10 minute walk

The initiative of its construction (1572), arises as a result of the problem between the merchants of Seville and the Chapter. The former used to carry out their commercial transactions on the steps of the Cathedral, but on some occasions they even took place inside the temple, which forced the Chapter to take measures due to the lack of respect that these activities entailed.

The first measure to be taken was the expropriation of the land occupied by the King's blacksmiths, part of the Mint, the hospital of Las Tablas and some houses belonging to the Chapter.

Its construction was carried out between 1583 and 1598 by Juan de Minjares and Alonso de Vandelvira.

In 1660 the first Sevillian Academy of Fine Arts was founded in the building. At the end of the 18th century, during the reign of Carlos III, it became the General Archive of the Indies. 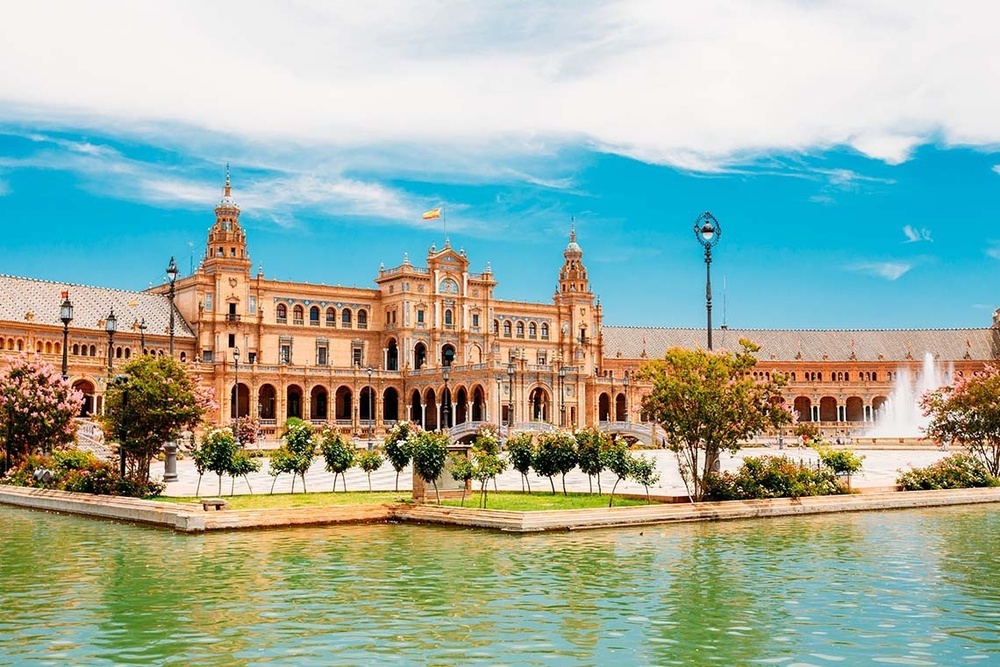 In 1893 the Infanta Maria Luisa donated to the city half of the garden of San Telmo that stretched from the Glorieta de San Diego to the river bank, which today is the Avenida de Maria Luisa and which was joined by the old Huerto de Mariana where later the Plaza de America would be located.

It was built by Aníbal González on the occasion of the Ibero-American Exposition of 1929. This building that traces a semicircle of two hundred meters in diameter, is built of brick with profuse use of ceramic coatings, topped in Plaza de España its ends by two towers.

The semicircle of the square is adorned by a set of benches covered with tiles that present iconographic motifs allusive to the Spanish provinces.

Its central part is crowned by a fountain. For the enjoyment of all the Sevillians and visitors it possesses a pond crossed by four bridges that represent the kingdoms of Aragon, Castile, Leon and Navarre. 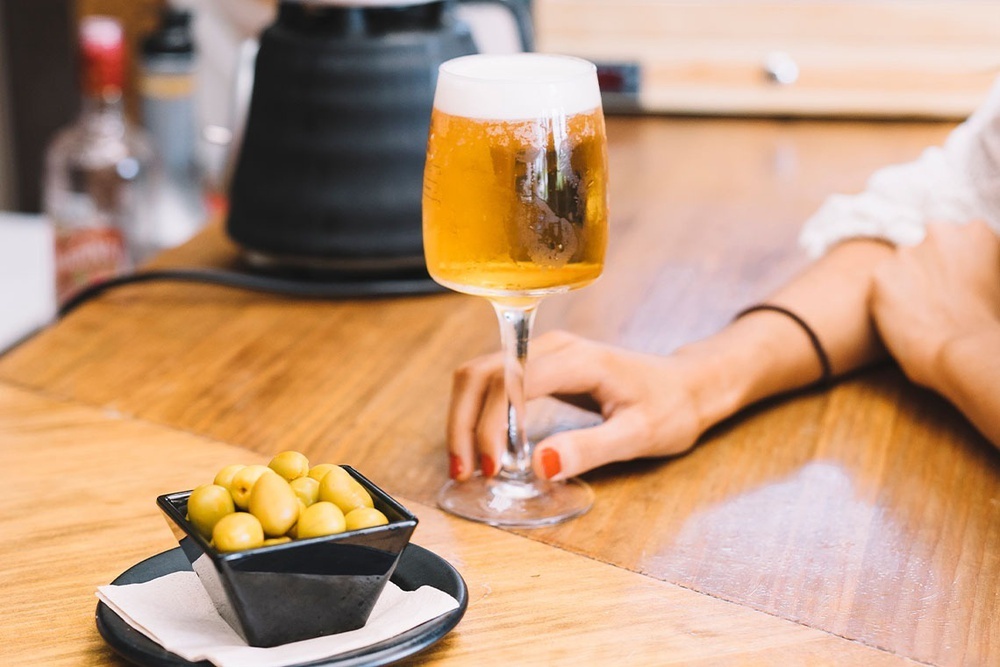 Gastronomy
Next to the best tapas establishments

The charm of Sevillian cuisine does not lie in the complication or elaboration of its recipes but in the style and flavorfulness of its seasoning. Among its dishes stand out the wise and simple recipes such as gazpacho, cold cream of various vegetables, pescaito frito, fish floured and fried in plenty of olive oil, huevos a la flamenca, fried eggs with tomato, chorizo and other ingredients, cocido andaluz, based on chickpeas and vegetables, menudo or rabo de toro.

However, the Sevillian is frugal in his meals, being the most typical of its cuisine its tapas; miniature meals, which are taken at random, between bar and bar, allowing for its size to try a wide variety of flavors without filling the stomach too much. Among them are the various salads, the shad roe (with mayonnaise or with vinaigrette salad), the pinchos morunos (skewers of beef with strong seasoning and barbecue), the pavías de pescado (pieces of cod battered in a dough of flour and yeast, fried in plenty of olive oil), the snails, and the fantastic olives. All this accompanied by wine from neighboring lands, such as the Aljarafe, Jerez, the golden Manzanilla or Montilla.

Among its most typical sweets, it is worth mentioning the Torrijas de Semana Santa, a Muslim-inspired recipe with the Hispanic additive of wine and the Yemas de San Leandro, made by the nuns of the convent of the same name, which is a sweet made with sugar and egg yolk.. 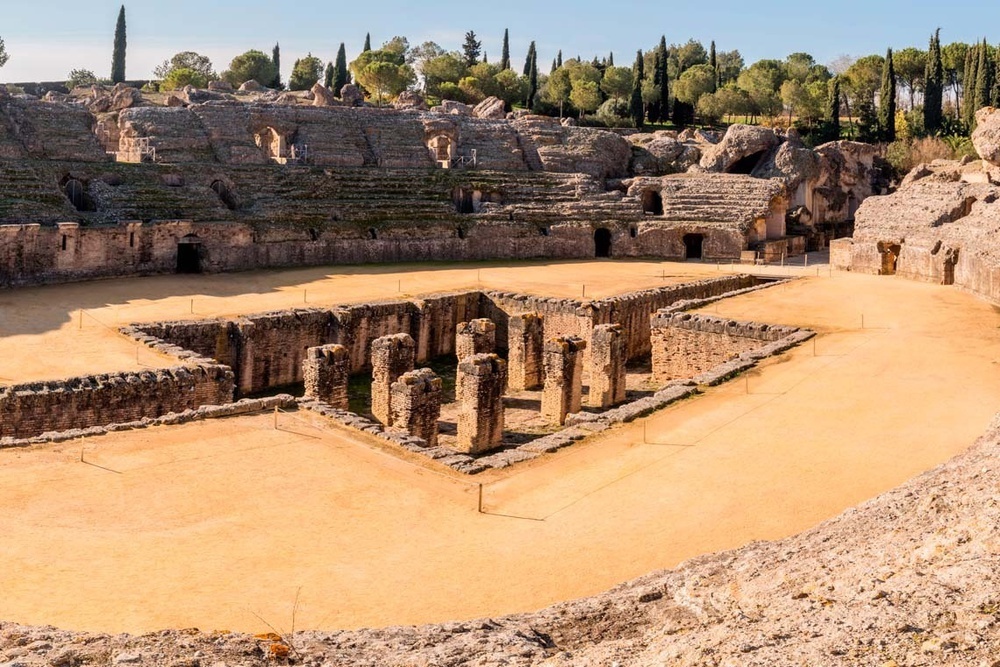 Italica is the Roman city that stood in what is now the municipality of Santiponce, of course, in the province of Seville. It was the place of origin of the family of Emperor Hadrian who elevated it to the status of colony, becoming known as Colonia Aelia Augusta Italicensium.

Italica consisted of two parts: the vetus urbs and the nova urbs, the latter built in Hadrian's time and currently constitutes the Archaeological Ensemble of Italica, where you can see the urban layout, the large houses (domus), with beautiful mosaics of different themes and the amphitheater. The theater, on the other hand, was located in the vetus urbs, so it was found under the houses of the current Santiponce.

The appellative of nova urbs, given by García y Bellido, is considered improper by some authors who prefer to refer to this extension of the city as Itálica adrianea. In it, and surrounded by walls, there are public buildings and elegant mansions known today for the decorative motifs of its mosaics. Its wide streets, with an orthogonal layout, are equipped with a perfected network of drinking water supply and sewerage.

Checking the availability of your search: